On November 16th 2021, the team comprised of the School of Nursing at the National University of Samoa, University of Stirling and Glasgow Caledonian University in the UK, launched “Ata Pu’upu’u ile Pa’ū po’o le oso ’ese o totoga o le Suilapalapa” – An Educational Video on Pelvic Organ Prolapse. The video was produced by local film company Samoa Grassroot Studio and was funded by the Global Challenges Research Fund in the UK. The British High Commissioner to Samoa, Mr. David Ward also attended the event.

Pelvic Organ Prolapse affects an estimated 4 out of every 10 women who have had children in the Western World, but the data on the prevalence of this condition among women in the Pacific is absent.  Chances of developing Pelvic Organ Prolapse increase with the number of children a woman has, getting older, if other women in the family had pelvic organ prolapse and being obese. Limited sexual and reproductive health education in schools and in general limit women’s knowledge of basic anatomy and physiology of the pelvic organs. Many women do not have symptoms of pelvic organ prolapse or symptoms are not recognized as such or attributed to aging. Early detection and treatment of Pelvic Organ Prolapse is beneficial for women, and can improve the quality of their lives.

“Many women with urinary incontinence and pelvic organ prolapse suffer in silence primarily due shame and secondly, due to not knowing that assistance with and relief of symptoms is available.”  Vice Chancellor of NUS, Aiono Professor Alec Ekeroma (OBGYN)

In 2020, the multi country team translated the Pelvic Organ Prolapse Symptom Score, a tool to measure the occurrence of signs and symptoms of the condition, into Samoan and piloted it with a small group of women. Several of the women interviewed had little to no knowledge about the pelvic organs and the reproductive health system.

Although the rest of the team could not attend, they were there in spirit. Professor Suzanne Hagen Professor of Health Services Research, at Glasgow Caledonian University in the UK said via email

“I’m delighted to have been part of this exciting project which has developed a very important resource to help improve the health of women in Samoa, and I’m proud that Glasgow Caledonian University has been able to contribute to making this happen.”

The video ““Ata Pu’upu’u ile Pa’ū po’o le oso ’ese o totoga o le Suilapalapa” seeks to address this information gap, as a video narrated in Samoan, with Samoan subtitles and with sign language. Signing was provided by the Deaf Association of Samoa. The video covers basic anatomy and physiology of the pelvic organs, the risk factors for pelvic organ prolapse, the signs and symptoms of pelvic organ prolapse and how it is treated.

This project is one of two projects being undertaken by the School of Nursing to improve access to health information. The School team comprised of Uila Lima, Ramona Boodoosingh and Saunima’a Ma Fulu-Aiolupotea believe that

“By producing an educational video that is accessible, inclusive and in the Samoan language, Samoan women in Samoa and abroad can learn about their bodies in a safe space in virtual space, to understand their health concerns so they can make more informed decisions about their health.” 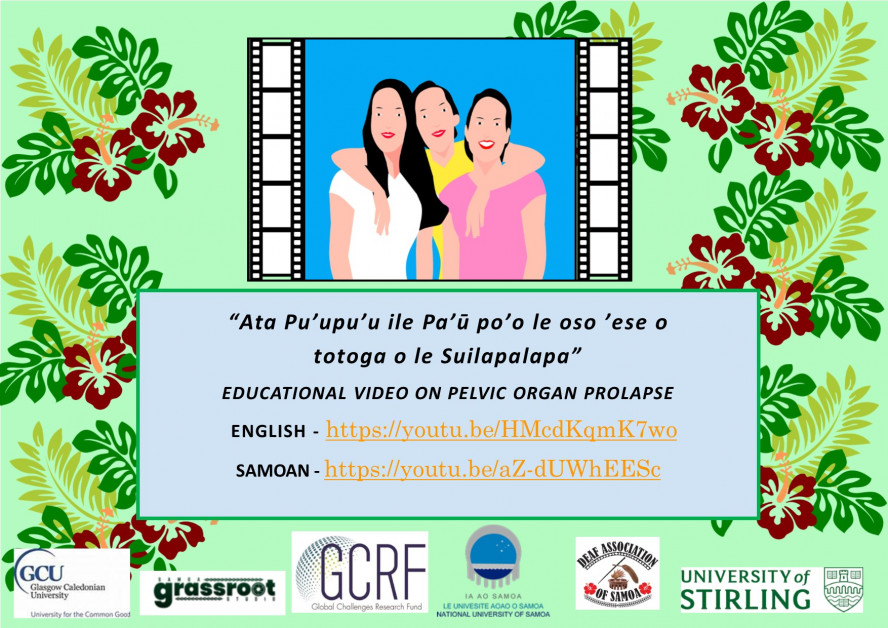 IMPORTANT NOTICE: Due to the global impacts of the Coronavirus

Important Notice: Dear OCIES members, Due to the global impacts